Sale on canvas prints! Use code ABCXYZ at checkout for a special discount!

So nice to see that someone loves my "New Shoes" work enough to buy and frame a print of it!

Early Dawn Horse Auction – One of Too Many

The numerous long drives over the past two years were wearing him down.
Many Bears had taught his daughter all he knew about the dozen or so
characteristics of a good pony; now without a worry, he chose to nap in the
truck while his daughter inspected any horses for sale.

Today, after twelve seasons of saving her money, and looking at countless
bunches of half-wild horses all over the state, in all kinds of weather,
Little Rising Hawk stood before her father with confident resolve. She told
him calmly that here in the first corral, she had found a little dun mare waiting
quietly with its black outlined ears up and eyes bright.

“Does this horse bear the markings?” Many Bears asked under his breath as
they neared the crowd of buyers.

The girl whispered, “The mare is striped on the insides of her knees, you will
see the bars as bold as the hawk feather in my hatband. Also, the mare saw
me before I saw her – just like in my dream!” Little Rising Hawk reminded him.

Hiding their excitement, Many Bears and Rising Hawk walked casually over
to get a bidder’s number.

Anxiety caused Rising Hawk to pout and regard the other buyers as potential
enemies in the unavoidable bidding war to come. Suddenly she remembered
that she was wearing her grandmother’s lucky earrings. Using both hands she
checked them and smiled gratefully to herself – her confidence restored.
Many Bears smiled slightly too because he knew the earrings may have helped
to find the mustang, but only the emergency cash in his pocket would completely
secure Little Rising Hawk’s dream horse.

Whatever happened to the Little Kitchen Girl? 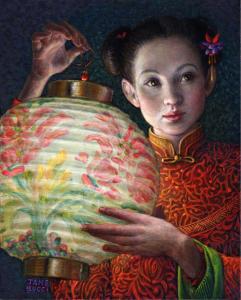 Hans Christian Andersen wrote "The Nightingale" and I always wondered what happened to the little girl in the story, so I did this painting called “Nightingale Girl” and thought about it.

__ There was a great inquiry after the wonderful Nightingale, which all the world knew excepting the people at the imperial court.

__ At last a poor little girl in the palace kitchen, said,
"The Nightingale? I know it well; it can sing gloriously. Every evening I get leave to carry my poor sick mother the scraps from the table. When I get back and rest in the wood, then I hear the Nightingale sing. And then water comes into my eyes, and it just as if my mother kissed me!"

__ "Little Kitchen Girl," said the Emperor's Lord-In-Waiting, "I will get you a place in the kitchen, with permission to see the Emperor dine, if you will lead us to the Nightingale, for it is announced for this evening."

__ So the little girl led the way out into the wood; half the court went forth where the Nightingale was accustomed to sing. And the child pointed at last to a little brown-gray bird up in the boughs.

__ "Little Nightingale," called the Kitchen Girl, "our gracious Emperor wishes you to sing before him."

__ "With the greatest pleasure!" replied the Nightingale, "Though my song sounds best in the greenwood!" Still it came willingly when it heard what the Emperor wished.

__ In the midst of the great hall, where the Emperor sat, a golden perch had been placed, on which the Nightingale was to sit. The little kitchen-girl had received permission to stand behind the door to watch. All were in full dress, and all looked at the little bird, to which the emperor nodded.

(This is where I embellished the story to tell more about the fate of the little kitchen girl...)

__ The Emperor called for the kitchen-girl to come forward. She came from her hiding place and knelt, bowed to the floor, and waited. He commanded her to rise and state her name.

__ "Here at the palace kitchen I am called Little-Bucket," the girl said. All at court began to laugh, but the Emperor silenced them instantly with a raised hand and arched brow.

__ Kindly then, he asked her about her stunning crimson robe and learned that Little-Bucket's mother had made and embroidered the robe years ago when she worked as seamstress for the Emperor's first daughter, Ping Mei. The princess had graciously given the robe to Little-Bucket on this night to wear at court.

__ The Emperor summoned the doctor and ordered him to go at once to heal the little girl's mother and bring the woman to the palace to live.

__ Turning back to the girl he said, "Today, little one, your humble, helpful sweetness has impressed me so greatly that I will bestow upon you a beautiful new name, in order for all to know that you please me." Then the Emperor himself stood up from the throne and raised his voice saying, "Because you, with your lantern, brought the Nightingale to me, you shall be called Liang Liang (Brightest-Bright) forever more!"

Maslow got it wrong -- You need color. 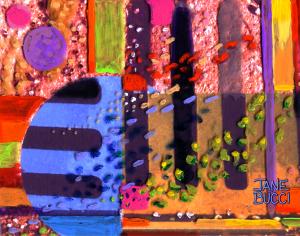 Just because there is concrete outside, cubicles inside doesn't mean you can't have color! 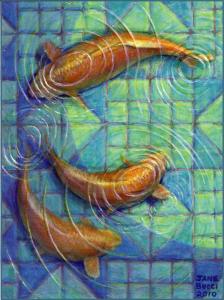 When I was a little girl, maybe 6 or 7, our town had a florist shop called Lindley's. It was a very elite operation and sold expensive, sometimes rare, and exotic plants, like orchids, as well as cut flowers. I went in there with my mother or grandmother countless times. The place was always bustling and had that humid smell of potting soil, fresh greenery and sweet blossoms. It was heaven on Earth in the winter! Inside, not far from the front door was a shallow pool of koi. I didn't even look at the rest of the store. The pool had at least six fat 18 inch fish swirling around in crystal water over bright little aqua blue tiles.

Like any other child, I was given the necessary shiny penny to throw in among the cruising koi so I could make a wish. An underwater treasure of at least three dollars in pennies laid under the bellies of the great fish on any given day. The shy, gleaming fish were so beautiful! I remember sitting blissfully on the edge of the pool watching the koi the entire time my adult escort was busy in the shop, and I remember being sharply disappointed when it was time to leave too. I wish I had remembered to wish for more time to stay there!

An Artistic Mind is Seldom Tidy

Well, I sold my "Stitch in Time" painting -- Thanks, Gary, of Milan, Illinois!

I'm going to miss her, serenely stitching away on her embroidery in her historically appropriate clothing and wide straw sun hat. >sigh<
But perhaps she will stay in Illinois -- unlike a lot of my other works that have "run off" to other states (even Hawaii).
A few paintings reside in Europe, Canada and the Netherlands as well. They never call, they never write ...

An Artistic Mind is Seldom Tidy 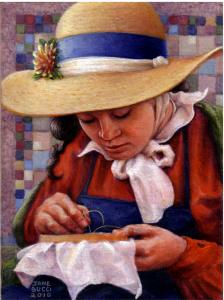 I finished the portrait of the re-enactor woman doing embroidery the last week of June.
I like it, but I think most people would prefer that she look like a super model.
Too bad for them! ;) This painting is a little different for me, as I usually show
more of the subject's face, but I don't mind the difference.

My painting named, "Little Winter Girl", brought me a lot of money and publicity
when it sold and the face of that sweet child is mostly turned away from the viewer.

The painting of the re-enactor is called "Stitch in Time".
and will go to the home of some savvy collector soon I hope!